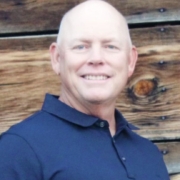 The Town of Tonopah is excited to announce that long-time employee Joe Westerlund was promoted to Town Manager by the Tonopah Town Board at their meeting held August 25, 2021.

Westerlund has spent most of his life in Tonopah and is a proud graduate of Tonopah High School. He started his career at the Tonopah Test Site and began working for the Town of Tonopah in 2010. Westerlund and his wife Lisa own a successful small business in Tonopah, M & K Enterprise. Westerlund has worked as Utility Manager for Tonopah Public Utilities (TPU) for the past six years, sharing the Acting Town Manager responsibilities with Administrative Manager Chris Mulkerns. Mulkerns recently left her position to move back to her home State of Michigan.

Westerlund was a Tonopah High School basketball coach, as well as a dedicated member of the Rotary Club of Tonopah. Westerlund served as president of the club for many years. Westerlund also actively participated in organizing the annual Jim Butler Days celebrations and was the host of the Nevada State Pro Armwrestling Tournament.

Westerlund believes that his staff makes a great team. The Town of Tonopah and Tonopah Public Utilities only have fourteen full-time employees but operate and maintain the Town and TPU offices, Tonopah Convention Center, Tonopah Historic Mining Park, Tonopah Fairgrounds and Arena, Tonopah Memorial Swimming Pool, Joe Friel Sports Complex, all Town parks, as well as the water and sewer utilities. Westerlund plans to continue improving his hometown and the quality of life in Tonopah by continuing developments such as water and sewer upgrades, park additions such as a basketball court at Jim Butler Park, parking lot improvements at the downtown plaza and Convention Center, and many others. He hopes to continue Tonopah’s economic growth by expanding Tonopah’s tourism programs, increasing Convention Center reservations, and working with the Tonopah Main Street program.

The National Votes for Women Trail, a project of the National Collaborative for Women’s History Sites, will install the first of five Nevada historic markers in Tonopah.

Las Vegas, Nevada – Voting rights for the majority of women across the country were secured with passage of the 19th Amendment to the U.S. Constitution. The centennial of that landmark will take place in 2020. To celebrate, the National Collaborative for Women’s History Sites (NCWHS) and the William G. Pomeroy Foundation have partnered to place historic markers in each state and territory of the US. The markers recognize significant events and people in the suffrage campaign. Nevada passed a woman suffrage bill in 1914 and active members of the state campaign went on to work for suffrage in other states and set up voter education groups in the state.

The first installation of a suffrage marker takes place Nov. 22 at noon at the Mizpah Hotel in Tonopah and will honor Marjorie Moore Brown whose work in the state’s second largest city in the center of the state proved vital to the state’s early success and important in the national campaign. The Mizpah Hotel provided meeting rooms for the suffrage league and hosted out of town suffrage speakers.

1912, the Nye County branch of the Nevada Equal Franchise Society (NEFS) organized and elected Brown press secretary. This responsibility included sending suffrage news briefs to local papers on a regular basis. The Tonopah Daily Bonanza opposed woman suffrage and never missed a chance to dismiss the voice of those who supported it. Nevertheless, Brown’s reputation and work kept the movement in the press. At the 1913 Nevada Equal Franchise Society meeting, Brown was elected second vice-president. Her support for Anne H. Martin’s state leadership became essential in 1913 when a split in the organization threatened to destabilize progress at a crucial time. Brown’s support maintained the county branch and the cohesion of the state organization. In 1914, the final year of the campaign, Brown was elected Third Vice-President of the NEFS. That fall, 70 percent of Nye County’s male voters voted yes and joined other counties to pass woman suffrage. Brown continued to support the national campaign and worked with two national organizations, the National American Woman Suffrage Association and the National Woman’s Party, for passage of suffrage in other states.

“It has been remarkable to discover the breadth and longevity of activity across Nevada that led to this win,” said Joanne Goodwin, professor of history at UNLV and a Board member of the NCWHS, who coordinated the Nevada effort.  “The National Collaborative for Women’s History Sites and Pomeroy Foundation have demonstrated the truly national effort of the campaign. We are grateful to the Tonopah Town Council and to the Mizpah Hotel for acknowledging this significant event.”

Other sites in Nevada are:

About the William G. Pomeroy Foundation The William G. Pomeroy Foundation is a private foundation established in 2005. The Foundation is committed to supporting the celebration and preservation of community history; and to raising awareness, supporting research and improving the quality of care for patients and their families who are facing a blood cancer diagnosis. To date, the Foundation has awarded nearly 800 grants for historic signage in New York State and beyond. Visit: www.wgpfoundation.org 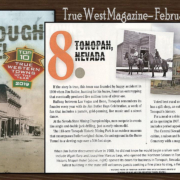 The legend goes that Tonopah was founded by happy accident in 1900 when Jim Butler, hunting for his burro, found an outcropping that eventually produced five million tons of silver ore. True or not, Tonopah is a place with a rich history and heritage.
That is one reason Tonopah is #8 among True West Magazine’s 2019 Top Western Towns. Tombstone, AZ took the top spot. They will be featured in the February 2019 issue, hitting newsstands on December 10, 2018.

Halfway between Las Vegas and Reno, Tonopah remembers its founder every year with its Jim Butler Days Celebration, a week of fun that includes a parade, gold panning, live music and a street dance. At the Nevada State Mining Championships, men compete in events like single and double jack drilling, just as early miners did.

The 113-acre Tonopah Historic Mining Park is an outdoor museum that encompasses Butler’s original claims—and it’s been voted best rural museum in Nevada five years running. For a meal or a drink, stop at the Mizpah Hotel, the height of luxury at its opening in 1907. The Central Nevada Museum has an Old West town with miners’ cabins, a saloon and blacksmith shop. Walk through the Old Tonopah Cemetery with a map that tells about the 300 souls buried there.

“Tonopah is a small town—about 2500 people—with a big heritage,” says True West Executive Editor Bob Boze Bell. “The people honor and celebrate their mining history and do a great job of presenting it to visitors. Tonopah truly deserves the designation as a Top Western Town.”

This is the 14th year True West has presented this annual award. Editors base their selection on criteria demonstrating how each town has preserved its history through old buildings, museums and other institutions, events, and promotions of historic resources.

True West magazine is in its 67th year of leading the way in presenting the true stories of Old West adventure, history, culture and preservation. For subscriptions and more information, visit TWMag.com or call 888-687-1881.