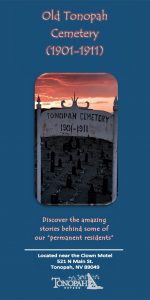 The Old Tonopah Cemetery is located right next to the infamous Clown Motel, which adds to its allure (and for some, its creepiness).

Many fascinating people are buried in the Old Tonopah Cemetery, and they have some incredible stories.  Download a Walking Tour map, or pick one up at one of our hotels, museums, or the Tonopah Town Office.

Read their stories and use the historic map to find their graves, or just explore the over 300 graves found there.  Find a grave you are interested in learning more about?  Write down the name and date of death, then go to https://chroniclingamerica.loc.gov to search some of the old newspapers online.  You can also head to the Central Nevada Museum here in Tonopah and use their fantastic research library.  Who knows what you might find!  Make sure to let us know if you find an interesting story of your own!

Enjoy exploring our amazing cemetery!  You may visit anytime during the day or night, and you are welcome to park in the Clown Motel parking lot.

Myth #1:     The old cemetery closed due to being overcrowded.

Fact:           The old cemetery closed as the tailings of the Tonopah Extension Mine kept washing over the graves, destroying headstones. The Mine was planning an extension of their operation and wanted to prevent the cemetery property from expanding. They donated the property of the “new” cemetery that is still in use today.

Myth #2:     A lot of the people buried in the cemetery died due to a “mysterious plaque”, also known as the “Tonopah plague”, that occurred in 1902.

Fact:           The “plague” was a huge number of deaths in 1905, not 1902, due to pneumonia and assumed to be a result of a lack of sanitation, especially close to the slaughterhouses. 56 people died between January and April, according to the Secretary State Board of Health in his report to Governor John Sparks. After an article in the San Francisco Call about the pneumonia scourge in Tonopah in 1901/1902, the Tonopah Daily Bonanza replied with a correction, arguing that they find the 27 deaths due to pneumonia between May 1901 and January 1902 in relation to a population of 1,500 not a heavy mortuary rate. There is nothing mysterious about the pneumonia cases in 1901/1902 or 1905 as they were well documented in the local newspaper.

Myth #3:     The headstones have always listed the cause of death.

Fact:           The cause of death was added in recent decades based on historic research conducted by historian Allen Metscher of the Central Nevada Historical Society. The cause of death was not listed on the original headstones. Only about 30% of headstones are original. Many headstones were rebuilt by the Tonopah Conservation Crew, under the guidance of Metscher, with old material, giving them an original look. Many of the graves were marked by Metscher using dousing rods, an old technique employed to locate ground water or other disturbances in the ground such as gravesites. The technique proved to be accurate when the plot map was found years later in an attic in Round Mountain in the late 1970’s.

We also created an Old Tonopah Cemetery Walking Tour video as a project with our local Tonopah High School. Check it out!